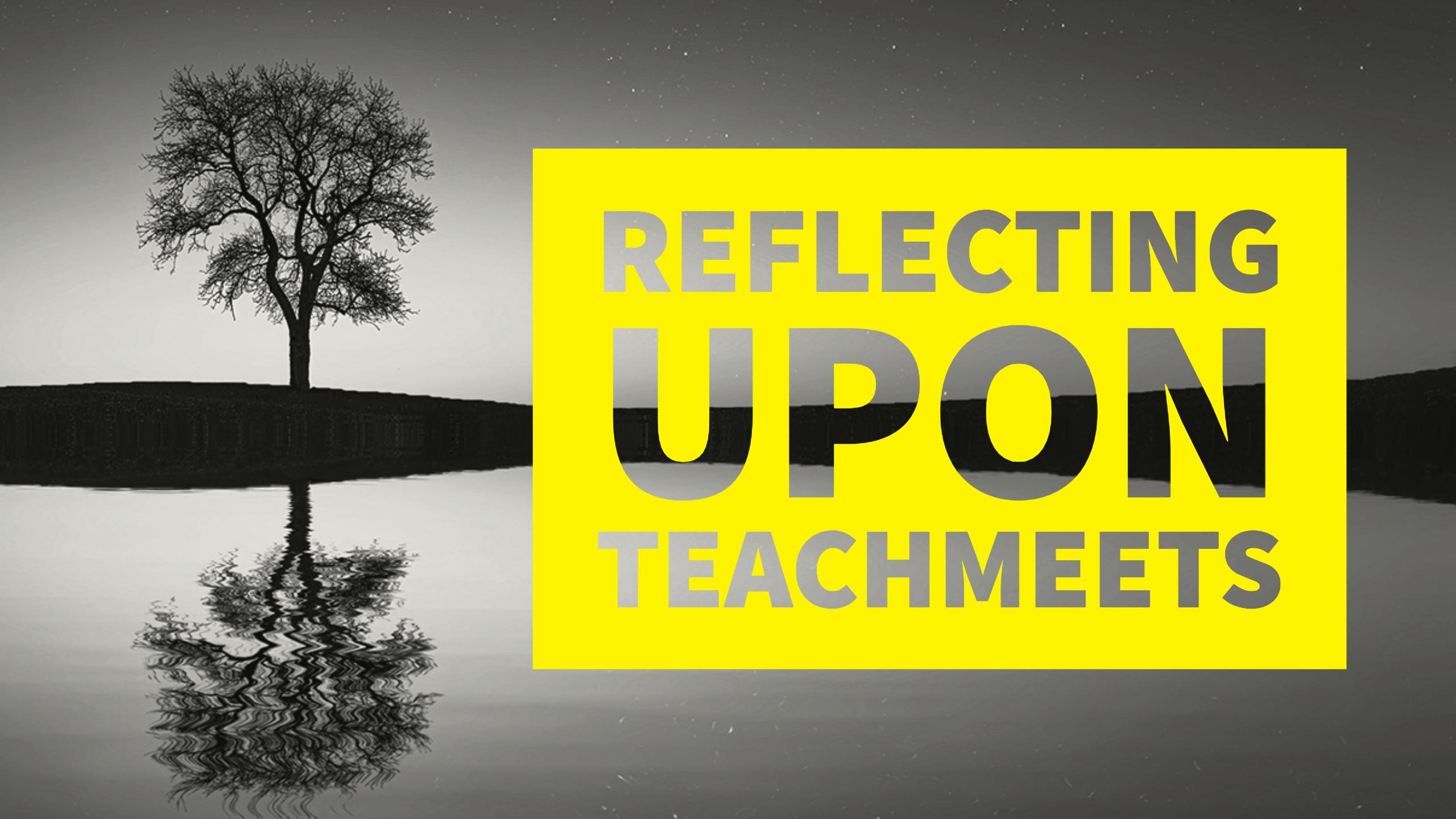 “TeachMeet at Clevedon works because people believe in it”

That was the recent reflection on TeachMeet Clevedon by Jen Ludd on her blog here which in many ways has prompted me to write this post. Not a rebuttal, but a celebration of TeachMeets, TeachMeet culture, where it has come from, what I’ve learned from TeachMeets at Clevedon and where they may go in the future.

I’ve written a number of times on Teachmeets such as “Learning Rocks“, “What is a TeachMeet anymore?” and “So you want to hold a TeachMeet event?“. It has been my great pleasure and honour to collaborate with colleagues both internal and external at Clevedon on creating the Teachmeet that we have there. The ethos at the school, headed by John Wells and supported by his senior team is one which nurtures and develops. I wouldn’t be in the position I am now where I’m moving in to a senior role myself if it wasn’t for this culture which oozes from every pore of the school.

At the start of the journey of TeachMeets at Clevedon, following my visit to one in Bristol with Sally Thorne (@mrsthorne), I received support and help from the Vital organisation and in particular Clare Fenwick (@csf0961) in setting up the first TeachMeet at Clevedon. Thank you Clare for the support and my apology for omitting you in my first draft of this post. I stand corrected.

Following on from that very first one, we’ve been very lucky through the organic development of our TeachMeet to have the major support of one individual, namely ‘Jim Smith‘. Many educators will know of him as the ‘Lazy Teacher’, something which often raises an eyebrow or two… ‘a lazy teacher’??!?!! I’m here to dispel a myth. He’s one of the single most hard-working people I know. If it wasn’t for the tireless work he puts in behind the scenes, working with me and sorting so many things that make it a great night; never asking for any thanks, the events simply wouldn’t happen. Thank you Jim.

Something which I believe we started too which has become a bit of a regular thing at many a Teachmeet across the UK has been the development of the keynote speaker. During the various Teachmeets we have had the fortune of having some amazing people introduce our event. Setting the tone and the impetus for the evening; we’ve been fortunate enough to have:

October 2011: TeachMeet Clevedon: Progress, Pace & Pzazz: No keynote, but interweaved in the night were David Didau and Jim Smith

Across the 6 events, we’ve been very fortunate to have the following people speak too:

More recently too we’ve introduced workshops to give delegates more opportunity to work with, discuss and develop on specialised topics across primary, secondary and further education sectors too. Across the last two events we’ve been fortunate to have some amazing sessions delivered by:

All of this is a long way from the meeting of minds of John Johnston, David Muir, Andrew Brown, Bob Hill and a visiting Will Richardson along with Ewan McIntosh who then coined their pub based meeting ‘TeachMeet’. 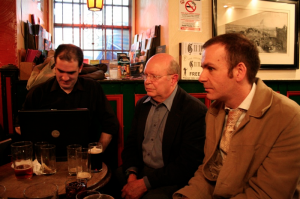 Much debate has formed since that time and seven years on, the TeachMeet grassroots organisation has grown massively. They happen all over the world and they have transformed CPD and how teachers learn and share with each other. Internal school TeachMeets take place and so it develops and grows. Excitingly, TeachMeet Collaborate will be happening early next academic year to aplomb I am sure, which will focus on projects that will develop collaboration across multiple schools. Amazing. A further culture has developed from this too called ‘Pedagoo’, spearheaded by Fearghal Kelly. Pedagoo events are a further development from those at a TeachMeet which base themselves (normally) around quite short presentations of ideas. Working in the same way as the workshops held at TeachMeet Clevedon, (although spread across an entire day). A Pedagoo event has specialised workshops across a whole day that allow teachers to drill down a little deeper, with the workshop leaders, in order to (hopefully) bring about more learning and sharing of ideas to develop practice.

The TeachMeet landscape has certainly moved on!

TeachMeets at Clevedon are certainly a long way from the original meeting of a few gents in a pub. 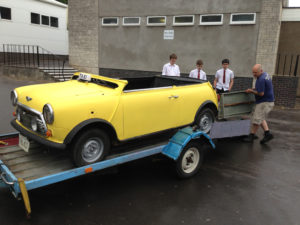 The TeachMeet at Clevedon involved a huge amount of people involved in getting it all organised. Jamie Williams worked tirelessly with two sixth formers who gave up a lot of their half term to devise and create the set. Jamie himself sorted out the mini which formed the taxi-cab part of the intro. An actual mini on stage (not to mention the ten or so of us to lift it on to the stage) including a number of students. Then there was the food. Patrick Champion sorting out the 200+ covers including vegetarian options and cooking it all up to form a lovely starter. Again, all with the students. Then there was the work of digital leaders, making the signposts, sorting the rooms, taking tickets on entrance, meeting and greeting, buddying with workshop leaders, getting them in, settled, logged on and sorted. The site team worked hard too to make sure that school was as spick and span as possible, working alongside students too. The Head of Music, Marianne Vivash sorted all of the recording and filming of all of the presentations, all night, including the workshops and made sure it all happened and went online to YouTube as soon as possible. Then there was the sound and lights being organised by the same students who gave up their half term to create the set. Plus the other students who were broadcasting on the school’s radio station all night live from the hall too. Let’s not forget the brilliant DT team who made the awesome talk / don’t talk sign that was linked up to let speakers know when it was time to wrap up.

I could carry on with more examples of how staff, working with students, came together to make the event happen.

The reason (I think) why Jen says “Teachmeet at Clevedon works because people believe in it” is because we do what all productions hope to do, which is provide a fantastic experience which has the impression of everything being completely calm and collected, just like a swan above water. The thing to remember is that whilst above the water things might seem calm, graceful even (although I didn’t feel very graceful coming on in that Mini!), underneath the surface, on the night and in the proceeding weeks, everyone is pulling together to make one big push; to showcase the very best of what the school is about. I cannot speak any more highly about how hard everyone worked to make it all come together. 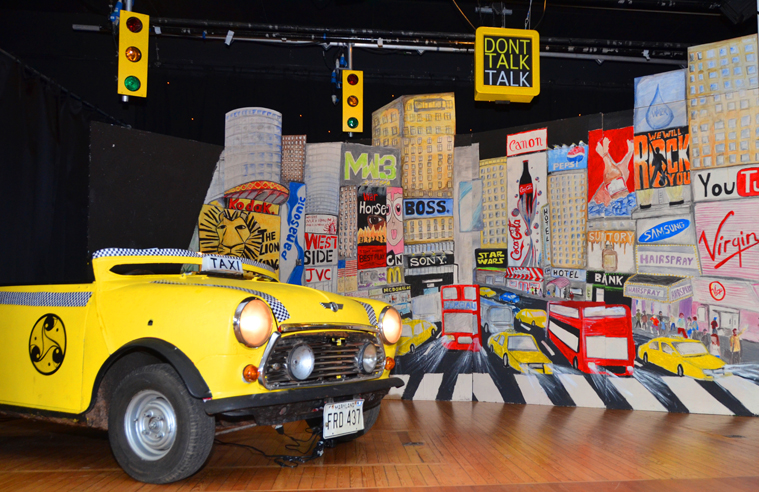 To place this into a teaching context, it’s a bit like behaviour management. People that are good at behaviour management make it look easy. Make it look like anyone could do it, with minimal effort. Making a TeachMeet run successfully is the same- it might look seamless and as though it just occurred, but in reality it’s the culmination of the hard work of a lot of people all striving towards a common goal.

TeachMeet Clevedon isn’t a myth – it does exist. For me it’s all about one absolutely brilliant school community, coming together like a well-oiled machine to provide an outstanding TeachMeet. This goes to the heart of the school and its ethos; where the community works in a way that can put on such an event. It’s not down to just one person. It’s about everyone coming together to showcase the school at its very best in sharing things which go to the core of its values; outstanding teaching and learning opportunities for all.

I can’t remember who coined the phrase ‘Super TeachMeet’ to describe the sort of TeachMeet we hold. Like Jen goes on to say, about how “it does not exist at other times”; like the Willy Wonka Factory of TeachMeets, people who get a ticket for the event treat it like they’re Charlie and they’ve just got a golden ticket. The TeachMeets at Clevedon could be called a ‘Super TeachMeet’ because of what is able to be achieved by the event in just the space of a few hours and the experiences it provides.

I know when I first brought TeachMeet to Clevedon, I was very much like the person described in this post about confidence and what getting involved in a TeachMeet can do to develop, nurture and improve your practice. I remember my first TeachMeet experience and as Hywel Roberts says, I was PBI – proper bricking it! Now look at me. Sequin jacketed, top hat wearing, compere extraordinaire (perhaps!) but would I have done that back at TMClevedon 1?

I look around the landscape of CPD across the country now and TeachMeet has changed everything. In these austere times and with the digital revolutions of Twitter, blogging and sharing; Teachers are doing it ‘Guerilla style’ as Dave Stacey calls it. Events like Edssential and the Berkhamsted TLAB and more are redefining how we learn and share our best practice. The comment that Dave Stacey made here in the comments, was about the power of TeachMeet being that it is such a customisable thing. Whilst the Clevedon model might be something that is huge and potentially scary for a number of teachers thinking about speaking, a TeachMeet doesn’t have to be like that. Any gathering of teachers such as was seen in the very first one can bring about some powerful learning. When I reflect back to look at the TeachMeets where I’ve learned something which has most affected my practice, it has to be the presentation that Chris Baker gave at my very first TeachMeet in Bristol where he introduced me to Google Forms. There were about 25 people at that TeachMeet. 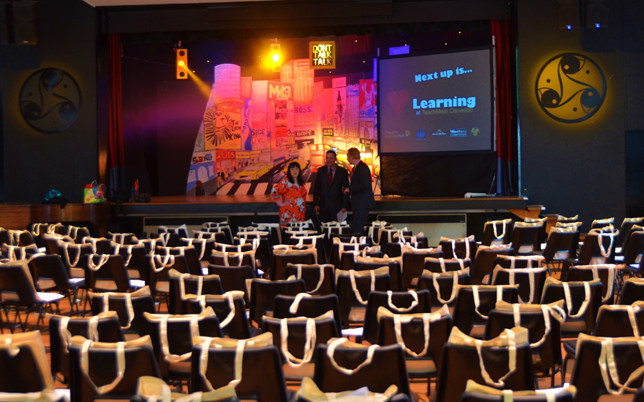 I was asked in a comment on my blog after the last TeachMeet Clevedon about how impact is measured. A number of replies ensued and you can read them here. I’m not sure about what exact impact has been made, but I do know that when you add up the stats, we’ve had almost 1000 visitors to the school, the YouTube channel has had more than 11,500 views, we had visitors from more than 100 schools and our reach extends across the world. I’m happy with that, and so are all the teachers that have benefited from the sharing of insight, ideas and innovation.

Thank you to everyone who has helped in whatever way to make the events the success that they’ve been. From a simple RT to the keynote speakers to the sponsors to you. Thank you.

I’m looking forward to more TeachMeets, Pedagoo events and more learning and sharing with others across the country and beyond so that I can continue to develop as a practitioner. Dylan Wiliam summed this up quite nicely when he said:

And for me… being involved in the TeachMeet movement has helped to develop me further than I could have dreamed. With what will most likely have been my last TeachMeet at Clevedon, I am proud to leave a legacy that I know will continue in its reach and impact.