Following requests for my presentation, please find a run down of what I went through below.

I started by talking about the power of mobile learning (mlearning) by presenting from the back of the auditorium. Something which brought a few chuckles and waves (it was almost like a real class!) as I airplayed my iPhone and showed the camera on the projected screen at the front so the audience could all see themselves.

I had prepared a presentation talking about SAMR and apps and tools that can help bring about transformational learning using technology, but as so many brilliant people had already talked about Socrative and Google Forms and sharing online and so forth and so on, I decided to talk about some inspiration I’ve had recently from following Greg Kulowiec (@gregkulowiec) on Twitter and on his blog: http://kulowiectech.blogspot.co.uk/

One thing I had recently seen Greg doing was utilising DoInk’s new Green Screen app (£1.99) and a brilliant workflow in to it taking in to account the great avatar creation app Tellagami (free), iMovie (£2.99) and Explain Everything (£1.99). I won’t repeat Greg’s work here but you can see his great video explaining how it all ties together here, but in my presentation I showed the various elements of my effort (which can be found here) to show the overall effect the App combination could have.

It should be said that during the presentation I took a question from the audience asking what green screening was. For those that aren’t aware of it, green screening is the process of having some film footage with all of the unnecessary video elements (e.g. the background) in one specific colour – green. When put in to software, the colour can be keyed out to replace it with an alternate background. The most regularly seen example of this is on the weather on the television, where presenters have a moving map or animation behind them demonstrating visually what / where different weather will be happening while they present and explain it.

Once I had finished the green screen part of the presentation, I had a few minutes left so I also took a moment to talk about Nearpod as a great way of getting less confident users of mobile technology using it in the classroom.

My final app that I presented was WordSalad. An app which provides an alternative to Wordle for creating word clouds on the iPad. 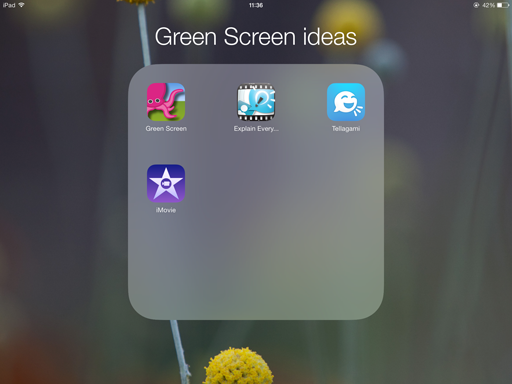 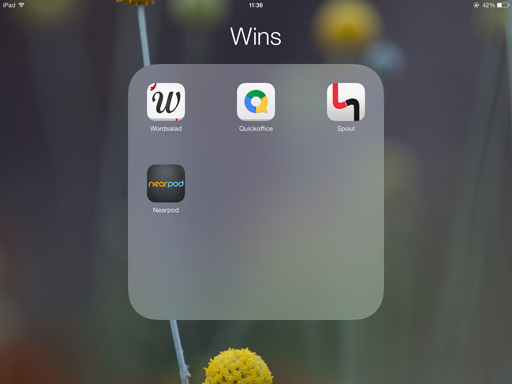 The last App to mention is the tool I used to present the Twitter wall. For some reason, the Visible Tweets website wasn’t displaying the hashtag – as a result, I suggested connecting my Apple TV to the projector and then mirroring my iPad (when presenters weren’t needing to mirror) using the great app ‘Spout‘.  As always it looked great and was visibly clear and worked well.

I hope you got something from the presentation!