By Mark AndersonNovember 6, 2018No Comments 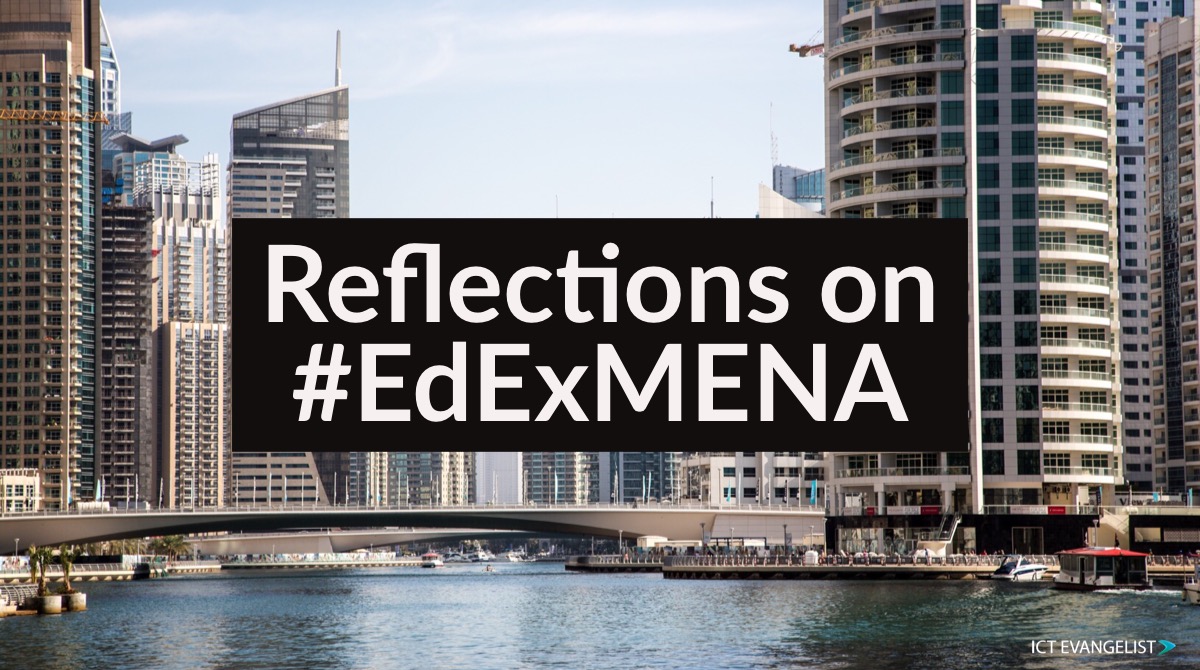 The EdExMENA school leaders event this week was a great event held at Le Meridien Hotel and Conference centre in Dubai. I was the closing keynote speaker at the event which is always a great slot to have. Obviously, you always worry that it could be seen as the graveyard shift but this definitely wasn’t the case at EdExMENA.

Bringing together school leaders, thought leaders, investors and school owners from around the MENA region, this event was jam-packed full of great content from the various speakers who attended. As always when I work in the Middle East I was well looked after and was blown away by the level of attention to detail by the organisers.

I managed to attend a number of interesting and thought-provoking sessions, the first of which was with Richard Gerver where he regaled lots of stories about visions for education, leadership and what a good education system should look like. I always smile when I see some of the bickering that happens on social media between teachers (and non-teachers) about education. Education is a force for good in this world and whilst knowledge is important, as Richard correctly reminded us, there is so much more to an education than just results. 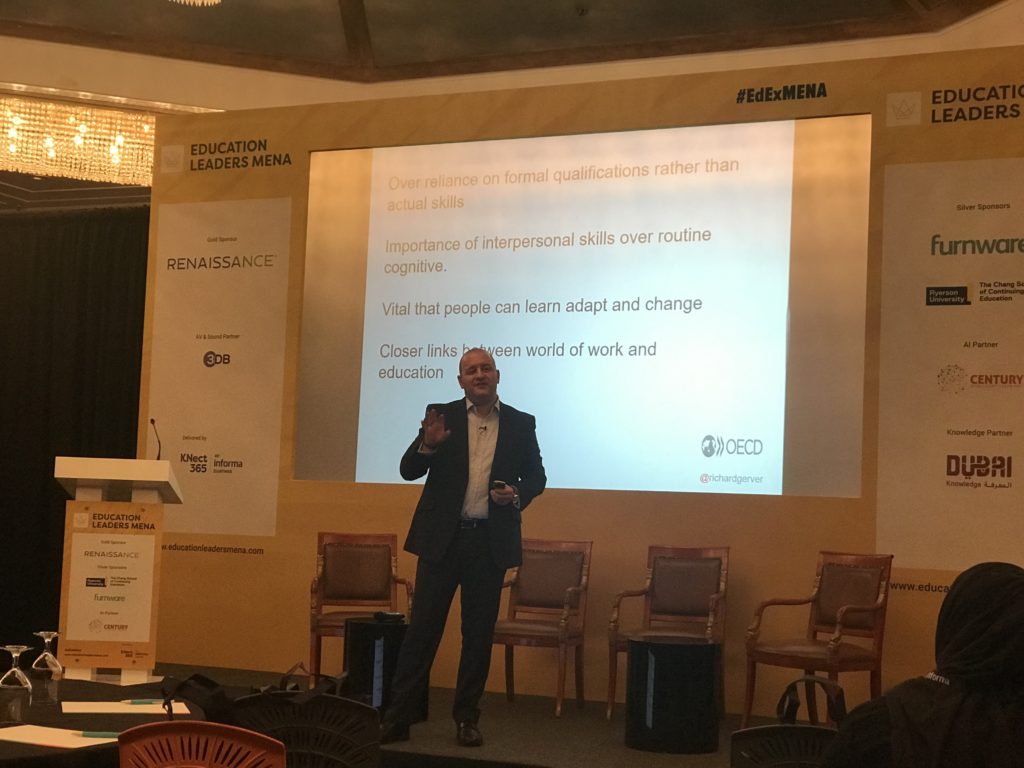 Another session I attended which I found to be compelling was that delivered by Dalia Hanna from the Chang School of Continuing Education which explored different models around how Higher Education can be interwoven for the benefit of all students. It was really interesting to see how their model of collaboration and innovation has led to increased success and how developing programming models in this way have led to new means of supporting societal change and improvements in mobility for their learners.

The programme at the event was really broad and so we saw not just featured speakers but also discussion panels featuring educators such as Steve Lupton from Repton Abu Dhabi, where he and other presenters explored ways in which schools in the Middle East can challenge long-standing learning models. As a school which was the first to gain Apple Distinguished School status in the UAE, Steve was well placed to share the ways in which innovative modern teaching and learning methods can disrupt the traditional learning models so that the most impact can be made for their learners.

I may be a little biased here as my final session to discuss in this reflection was that of a former colleague from my first teaching post as an NQT, now Headteacher at the British School in the Netherlands, Paul Topping. 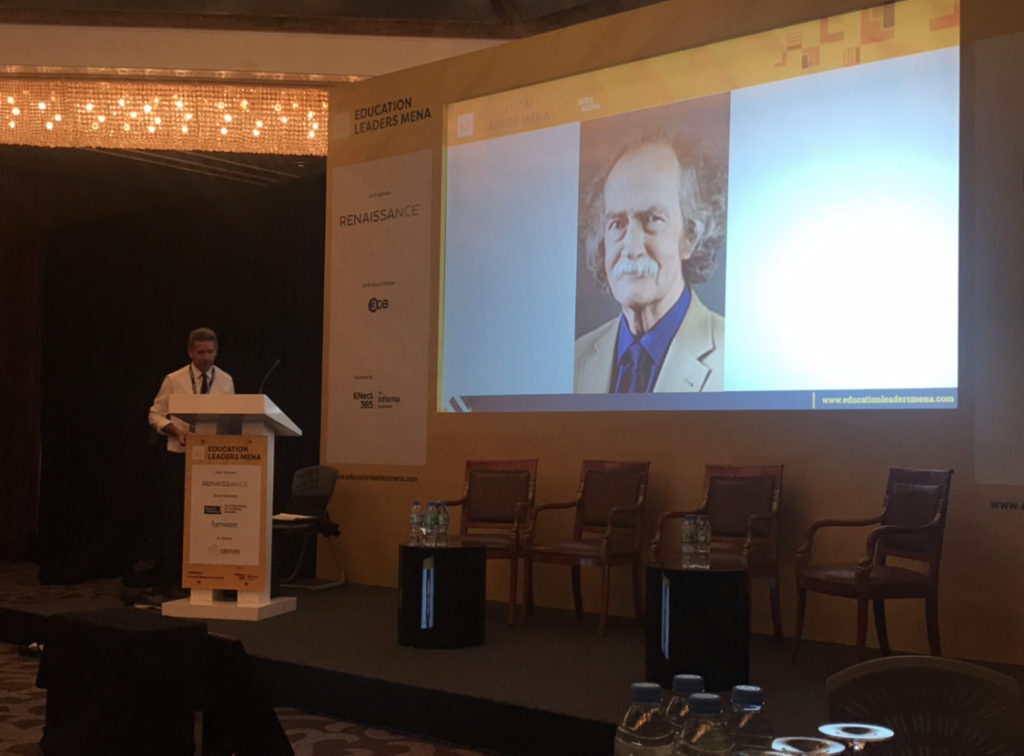 His session titled, ‘Leadership and great teaching – the journey Headteachers must make’ was not only inspiring but spoke of his great experiences in the classroom and in the many schools he has worked in during his career. The elements of his presentation which resonated the most were around his thoughts about lesson observations and their efficacy and purpose. As it should be, he focused upon the importance of lesson observations being used as a professional development opportunity. Not a means to catch a teacher out but to catch them in; to use it as an opportunity to praise and provide the opportunity for strong professional learning dialogues.

For me it was a difficult section to listen to as Paul regaled a story of an old colleague of both of ours who happened to be someone who was my pastoral mentor in my NQT year and who was also my Head of Year. He told a story about how our colleague, Rob Smith, had been upset at Paul’s feedback at the end of a lesson observation all those years ago.

In his conversation with Rob, he asked why he was upset at the feedback he’d been given.

It wasn’t because the feedback was particularly difficult to hear but because for the first time in the 20+ years of Rob’s professional career he had received some feedback which was positive. When was the last time you were observed and had some professional discussion about what was happening in-the-moment, during the lesson, as a means of learning with and from each other, both as observer and observee.

By comparison, Paul told a story of one of his own worst ever lesson observations he had received – it was a Thursday afternoon, condensation running down the window and it was an observation by an Ofsted inspector as part of his school’s Ofsted inspection.

At the end of this lesson, Paul asked for some feedback. The single piece of feedback Paul received was that ‘teaching was good overall’. This sort of feedback or experience simply isn’t good enough.

As so many have written and discussed previously, lesson observations should be an opportunity to talk about learning and teaching – not used as a high stakes opportunity to beat a teacher with a clipboard and arbitrary comments that help you develop as a professional.

Just as we know with our learners, high stakes testing doesn’t help our learners in the slightest. Why then do so many schools still even now have graded lesson observations? We know that low stakes testing can have a big impact on helping our learners progress, so why can’t we see more of the low stakes lesson observations that help with professional dialogue about what can actually work. We can learn so much more from each other. It takes humility and strong leadership to make it so you can put your hand up and have those professional learning dialogues and Paul shared his own humility despite his huge levels of pathos, understanding and leadership experience by sharing his experiences. It was a fantastic session and it was a real privilege to see him sharing this all these years after I first met him way back at the start of my teaching career. 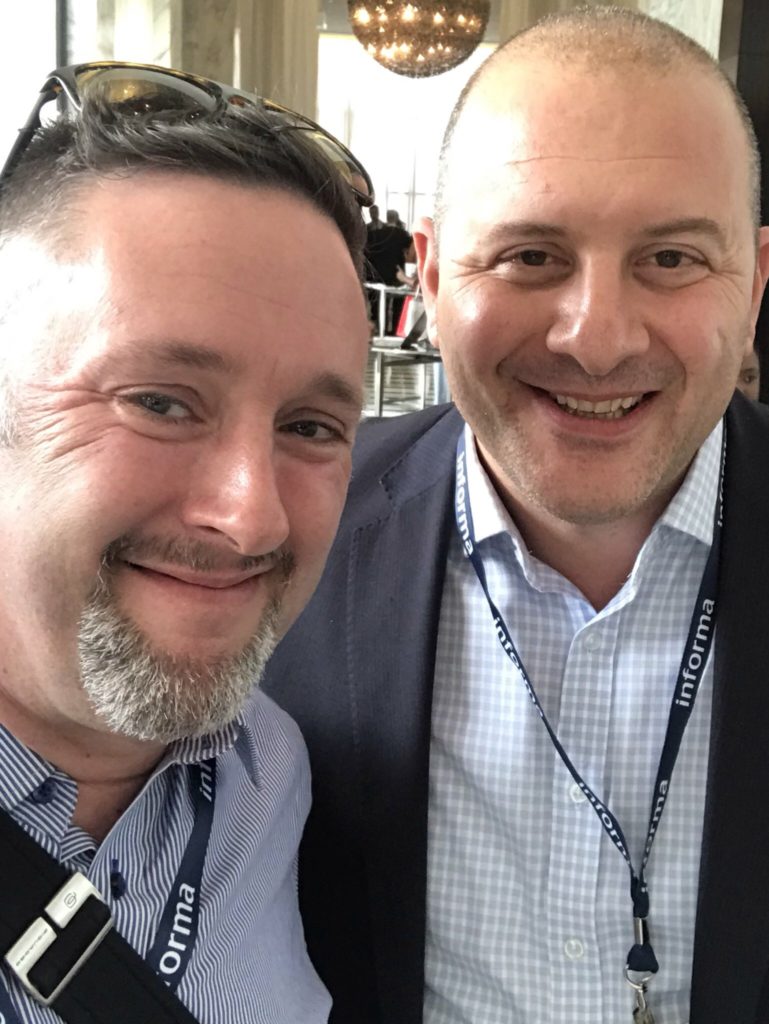 A great opportunity to catch up with and learn from Richard Gerver.

What was my keynote about?

My keynote had the title ‘Personalised learning, passing fad or future imperative?’.

Here are some tweets about my keynote:

"At its heart, personalised learning is about creating more #equitable #learning opportunities for students." @ICTEvangelist at #EdExMENA pic.twitter.com/gudiXQIJk5

Looking forward to this! @ICTEvangelist diving into his presentation at Education Leaders MENA. #edexMena pic.twitter.com/toAaElJwil

The event at EdExMENA was full of inspiration and at the end of the event I was filmed by the organisers and was asked if I could describe the event in just a few words. I simply replied with this:

I hope you enjoyed my reflections on what for me, was a superb event with great networking, sharing and speakers whose presentations were kept to a tight schedule and kept on time all day on both of the days. Thanks for reading my post.