In defence of technicians 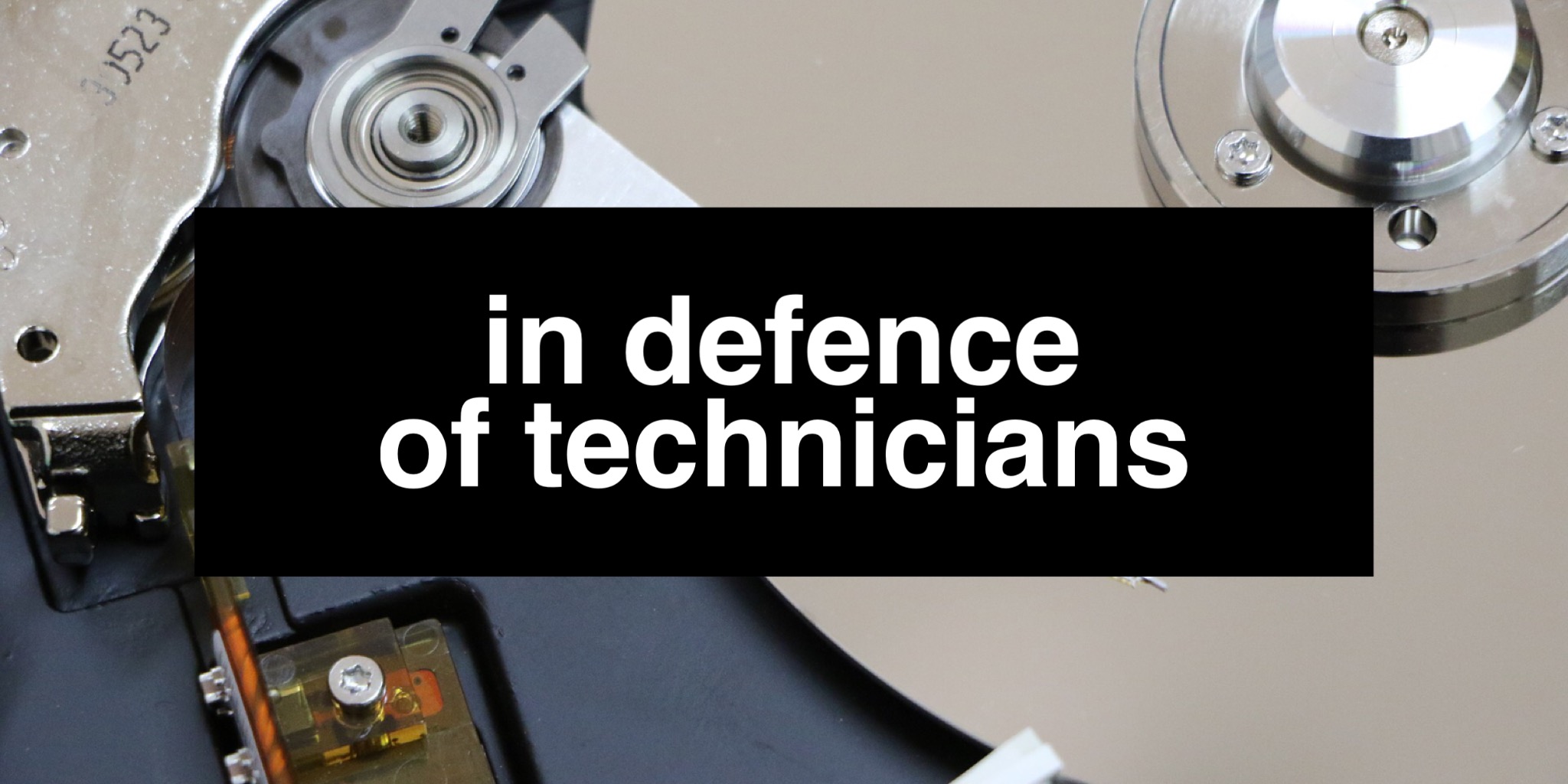 So it seems that my post from last week caused a bit of a furore among technicians; no surprise there I guess given the title although some (wrongly) saw the post as a strategic and personal attack upon those in technical roles in schools. Having read through many pages of forum posts about it and a variety of comments on the post in question I have written the following post to expand upon my original post and take on board a number of different viewpoints on the topic. Additionally for clarity, I want make it clear that I support a lot of what has been talked about which it was felt I didn’t address clearly enough in my previous post. It was felt that my comments at the end of the post saying that the issues raised weren’t commonplace everywhere didn’t go far enough and appeared to be a token gesture. I hope this helps with that.

So what are the arguments?

A number of different arguments have been brought back to me in reply.  Patrick (and thank you Patrick) left the following summary and thoughts on his comment on my original post which I think sums it up quite nicely although I will expand afterwards on some other issues:

“Let me now make four simple statements that I believe to be true:

I hesitate a little with number 4 because my personal belief is that there will almost certainly be a direct correlation – number 4 is essentially just to accommodate the plain bad apples.

The solutions proposed some (including Mark) can work – and have been shown to in practice – but if I’m honest I would have expected to see much more progress in schools across the sector by now. The niggle, I think, is a further complication: there is a “resentment culture”. IT staff MUST take responsibility for their part in that too.

Nevertheless, to my mind, to an extent it’s perfectly natural given the circumstances in play. The problem with the education sector is that all anyone in it wants to talk about is education. That means it is all too easy for any other concerns to be sidelined, among which of course is the “plight” of non-teaching staff in general. Where that affects IT staff is the low pay with limited progression (academisation has not solved this across the board and was never going to), little to no training combined with expectation creep, the glass ceiling and – of course – the unfavourable comparison of their terms and conditions with those of teaching staff (TLRs for additional responsibility etc).

What I say now, I say directly to Mark and every other current or former senior leader with valid concerns about IT staff in education:

Where employment structures create an artificial delineation between groups of staff – particularly where it’s just the two – a “resentment culture” will arise. It simply will, and it is behind both many of these problems and the reason why many of us immediately go on the defensive when presented with blogs such as this. We would move things forward in this sector a lot faster (or indeed at all!) if its leaders, bloggers and politicians would only focus on addressing that root cause instead of pointing the finger when staff display its symptoms. There is a HUGE lobbying gap there that Education Leadership unions – as well as other “free voices” – are simply not addressing.””

Pay and opportunities for CPD

In general terms it was felt that technicians aren’t given enough money for their jobs or given decent supportive professional development opportunities to sustain their skills. The second point here about professional development is absolutely key. In order for technicians to stay current and to keep your networks as secure as possible, professional development opportunities are absolutely required. From a leadership perspective, this should be built in to the annual CPD budget in order to facilitate management of these finances. Courses for technical services are often not cheap and so forward thinking and planning is paramount if they are to happen.

A number of people commented on the lack of pay progression opportunities in their comments and that there is a glass ceiling in the work that they do. A number of them commented how there was no opportunity for them to progress any further than perhaps network manager. A few quoted some good examples of how facilitating the access of the right candidate to a leadership position in the school can have great benefit to the school. In my experience, this doesn’t happen very often, however I can see their point. Someone who has a clear understanding of how data and access to information across school systems should have an integral and important role to play in the management of a school. Perhaps we (as an education community) should consider this in our management structures; after all – data does play (whether we like it or not) a massive part in our quality assurance processes and in our day to day running of our schools.

One area which came out in discussion more often than most was the area of communication between technical support teams and the rest of the teaching community; from teachers to leadership.

In his post ‘Stop, Collaborate and Listen‘, Matt ‘Ice Ice Baby’ Setchell (apologies Matt, I couldn’t help it) writes about there being a need for all stakeholders to come together on issues concernining technology and learning. He writes:

“We both have hard, demanding, complex, ever changing roles with constant pressure and changing goal posts. It’s not a competition to see who fails first or who we can frustrate the most. It should be how can we be inclusive and work together for a solution that propels our core business, learning for young people forward.”

It is absolutely right, that stakeholders should talk together and work together to this core aim that he talks about. From the feedback I’ve received from numerous network managers and technicians on this topic there is a huge amount of bad feeling amongst them that they are not involved in important discussions – this should stop. A number of different responses have also stated that no technician has ever been the reason why a school has been given a failing Ofsted too – well of course that is the case, that is something which comes down to the leadership and management of the school; however – it does highlight the misinterpretation of the situation.

The point of all of this has been that despite there being some fantastic colleagues out there who work such as Matt and others that have added their points of view such as Tony Sheppard there are still (as highlighted in this post from Andrew Douch) a significant number of schools both nationally and given Andrew is in Australia, internationally where technical staff don’t communicate well with teaching teams to bring about suitable access and progress which can have an impact upon learning. Andrew writes:

“I’m not saying some sites shouldn’t be blocked at school and I absolutely appreciate the instrumental role that a technician plays in a school (great technicians are worth their weight in gold! — this I know from my own school experience). Neither am I saying that technicians shouldn’t offer advice and guidance about technology choices. They obviously have invaluable experience, insights and knowledge. But a technician’s primary focus is necessarily on technology, whereas a teacher’s is on pedagogy. We need to remember the primary purpose of schools and keep those two foci prioritised accordingly.

If an application or service poses a real threat to the security of the network (Bit Torrent, P2P), then I think it’s the technician’s place to make that call. But in many schools, something is disallowed because the technician thinks students will waste time on it (YouTube, Twitter) or they just don’t like it (Macs, Weebly), or it side-steps a system they have spent time setting up for the school (DropBox, Schoology). In such cases it’s not an issue of network integrity but classroom management — making it an educational decision that should be decided by teachers.

In Jon Witts’ post also titled ‘In defence of technicians‘ he writes that he disagrees with my point about in some schools teachers play the role of technicians. I absolutely agree with what he says. That said, I have come across a number of Primary schools where for whatever reason although often budgetary teachers end up taking on the role of technician in the day to day running of the network and managing hardware on site. This isn’t an ideal situation by anyone’s standards but his points are in alignment with my thinking too however in some schools budgetary restraints mean that this does happen.

“I cannot honestly agree that in this day and age a teacher can be expected to, nor have the time to, run a school network to level which modern technology requires. Now we are not just talking about ensuring the teachers can use the tech in their classrooms here; a modern school network now needs to support a myriad of different uses”

Jon also argued the point about managed services not being helpful with a school. Again, this could have been made clearer in my post, however I have experienced both negative and positive experiences with managed services. The positive examples I have experienced are those where there have been an onsite support alongside external support that can come in when necessary, again in Primary. Primary schools have such tight budgets compared to Secondary schools – it’s likely to be the case that the majority of Primary schools cannot afford a 30K+ salary to manage and run their technical services. It may be money well spent but I suspect that other priorities often take over.

Jon continues to make some valid recommendations where he says that he thinks that:

This is clearly a long post but goes in many ways to what is clearly an issue in schools. Perhaps I should just leave it here for now and I’ll end by doing two things. Firstly reiterating Patrick’s end point from his comment (edited)…

“We would move things forward in this sector a lot faster if its leaders, bloggers and politicians would only focus on addressing that root cause instead of pointing the finger when staff display its symptoms. There is a HUGE lobbying gap there that Education Leadership unions – as well as other “free voices” – are simply not addressing.”

And secondly by saying that it is good to know that there are positive conversations happening to start addressing these issues.