Why you should be a tweeting school 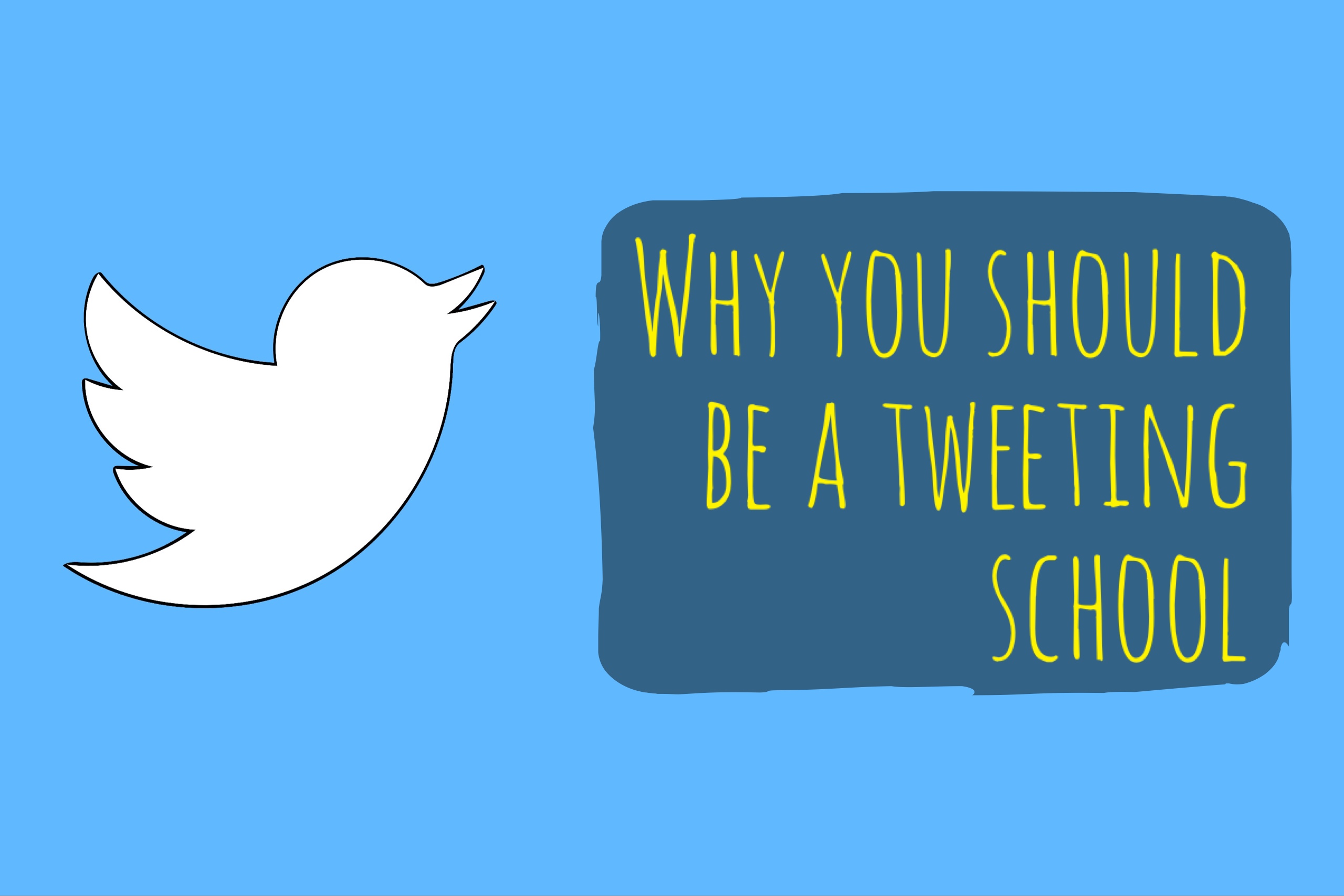 Twitter is not just for the teacher, or even the school department. Schools can gain lots from having their own whole school account. There are many ways in which you can use it too. From reporting on whole school issues, passing out messages about snow days and much more, there are very compelling reasons as to why you would want to be a ‘tweeting school’. There are a fair amount of tweeting headteachers too, although here I will focus solely on schools.

I originally wrote this for Innovate My School more than a year ago; here’s why I think you should be a tweeting school.

I am a firm believer in sharing the great things that happen within a school. There are times when schools need to share time-sensitive or pertinent information with parents. This could be done via the school website, but as busy people, how often does your parent community check the site? In these social media times, schools should be putting themselves where their community are, and not just on Twitter. Parents also use Facebook, Google+ and Instagram and some will just prefer good old-fashioned email. Schools should be capitalising upon this and not just leaving it to chance that parents might see an update to the school website.

For me, Twitter for a whole school should really be a one way stream. Some schools do use it to engage with others – that is their choice, but for me – one of the best aspects of Twitter is its ability to share the amazing things that go on within a school. Schools are fantastic places; centres of knowledge and education. When it comes to education I always remember a line by the actor Rob Lowe playing the role of Sam Seaborn in The West Wing where he says: “Education is the silver bullet. Education is everything. We don’t need little changes; we need gigantic, monumental changes. Schools should be palaces…”. In my mind, schools are palaces, and they should be sharing the amazing things they do with their community. One of the most important decisions anyone ever makes, as a parent, is the one where you choose the school your child goes to. As a parent, you entrust that school with a significant part of the raising of your child. Parents want to know what goes on in the school and Twitter is a way in which that information can be shared.

There are some great examples out there of how a Twitter account can be used by a school:

Friday the Hall will be a sight to behold! A sea of cakes created by our many budding bakers! #moveovermaryandpaul pic.twitter.com/i3tH5my6yv

Good Luck to those @ClevedonSchool going through the night at our '24hr Bounce For Amnesty' Very proud #clevedonway pic.twitter.com/QyAZkT1bVJ

Team 6 working together to decide what should go into a Level 6 piece of writing! pic.twitter.com/jYBCIB9IWU

How can you do it?

Your Twitter account should reflect that school voice; as a school you will know what your ‘school voice’ is. It is most likely to come from the vision that stems from your headteacher and your board of Governors.

It should be the case that whether it is the headteacher, assistant head, head of House, teacher or librarian… no one should be able to know who is actually writing the tweets. It should be the ‘school voice’. By having a clear and transparent policy that reflects this, you will be able to tweet more, engage more, share more and have a far more active school voice on Twitter.

My recommendation has always been to formalise that voice into a school voice policy. A set of rules, one which clearly outlines what and how that school voice should be used and what messages it should give. The reason for this will be clear shortly. You should most probably choose to not follow the personal accounts of teachers within your school to keep personal accounts personal.

Once you have formed a school voice policy, you can spread the load of the running of the Twitter account to different staff around the school. As a school leadership team, you cannot be reporting all of the different things that happen around your school all of the time. You are far too busy, therefore you need to share that load.

Twitter estimate that tweets get 70% more engagement if they involve an image. That’s great, but you also need to know who has and hasn’t given permission to have their image or likeness shared or photographed. Do not publish images of students whose parents have not consented to the picture of their child being taken. Be mindful too of the messages you send. As someone who has managed and/or tweeted on quite a few whole school Twitter accounts, I know that you will invariably encounter some members of your community who have questions or even an axe to grind. It is my advice to not engage with those requests on Twitter but to direct them to contact the school directly if you want to, but that is entirely up to you.

How can you be even more effective?

I mentioned earlier in the article about ensuring that you communicate not just through Twitter, but through other channels such as email, Instagram, Google+, and Facebook. If you had to write updates to all of these different types of social media, you would find this would take an awfully long time and make it an onerous task. Sharing the hive of activity from your school shouldn’t be onerous. It should be a joy. Luckily, you can leverage technology to do this for you. Using free tools such as ‘IF’ (previously IFTTT, ‘If this, then that’) you can create recipes to act upon different events that happen online.

An example of this could be, each time you update your school website, ‘IF’ will tweet the title and a link to that website posting. You can set it up with lots of different recipes so that you can completely automate that whole process, meaning that every time you update your website, ‘IF’ can automatically then tweet it, post it on your Facebook page, so forth and so on. It is a really powerful tool. It can be accessed directly via their website, and you can download the app for your iPad or iPhone or for Android devices.

Many schools also capitalise further on their Twitter feed by embedding the Twitter account onto their school homepage, adding a more ‘live’ feel to the website. If you are a school that isn’t tweeting regularly, however, it can make the site and school appear quite stagnant. Best practice sees schools tweeting between three and 10 times per day. The correct balance is important, as when you send too many tweets people will wonder whether you’re actually focused on learning. Too few and they might perceive this as to nothing is happening. The correct amount of tweets is very individual to every school. Work out what is best for your school and you will get the balance right. You may like to retweet some of your school department tweets too. This will show a whole school support of the social media channel and support colleagues with their tweeting too.

To summarise, there is lots to think about, but in reality, it is actually quite simple. Just see Twitter as a way of sharing the great things that are going on in your school and don’t sweat over how many followers you have. Remember, parents and your community can see your tweets even if they don’t follow you.

Here are my top ten tips.

And if you don’t think I know what I’m talking about, here are some tweets from teachers and schools doing it already…

@ICTEvangelist @InnovateMySchl @Markfinnis @BehaviourTeach we tweet to showcase our students, successes & of course to raise our profile.

@ICTEvangelist-just started-Ss like seeing work praised, to see what they've missed if abs, good for revn tips and stimulating interest.

@ICTEvangelist I tweet to celebrate high quality children's work + educational issues with the community. Will tweet things of ed interest.

With further endorsement from Jennie Redwood, Data and Communications manager at @ClevedonSchool, “Our Twitter feed is a great way to share school news, live updates from our events and to celebrate achievements in an instant way.” If you are not tweeting as a school already – shouldn’t you be?

If you’d like help with your use of social media in your school then please get in touch.