The Periodic Table of iOS Apps for AR and VR 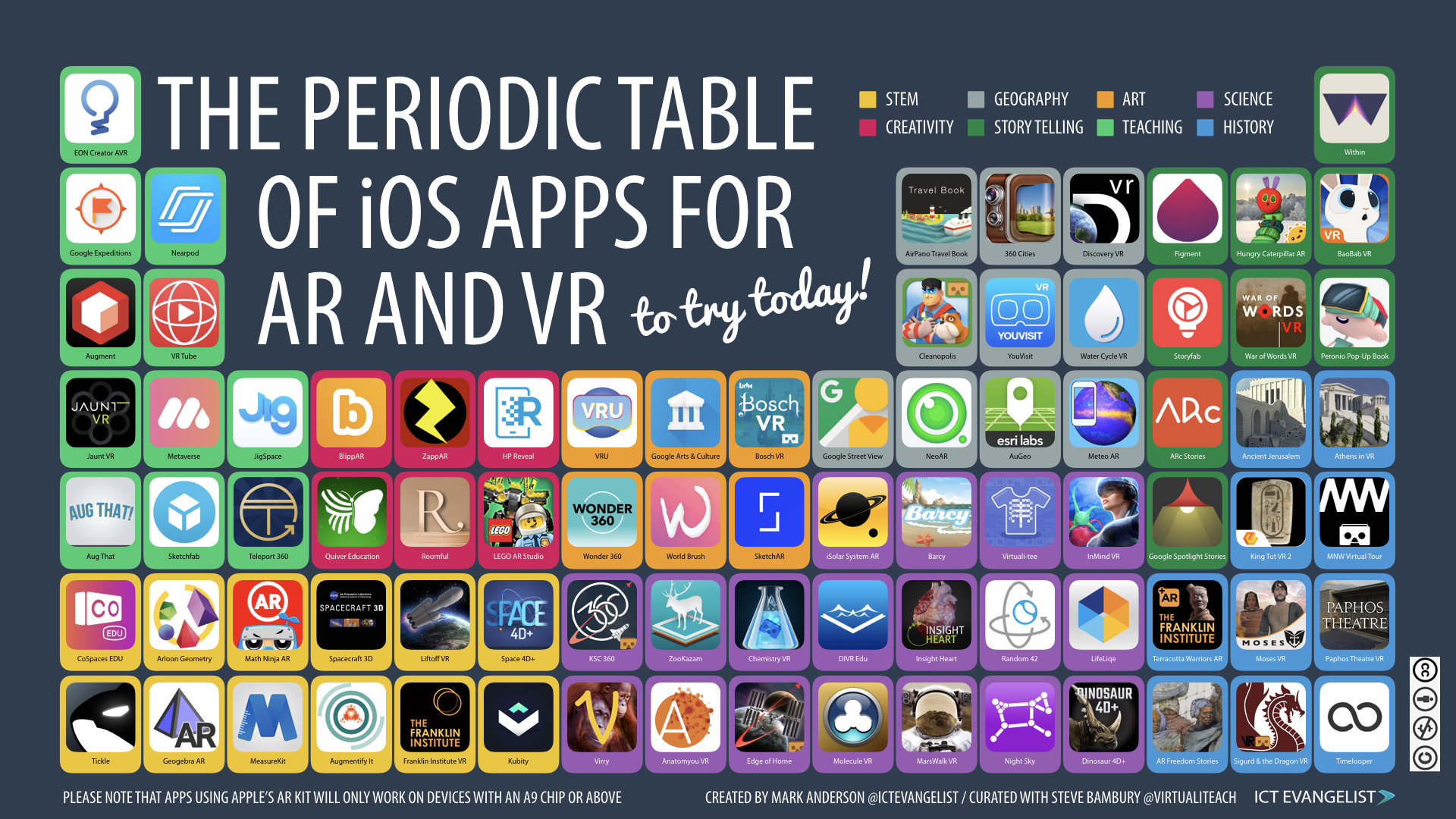 One of the most exciting arenas for innovation in education with technology is that of augmented reality and virtual reality. I’ve been a fan of exploring how these types of apps can be used to support and enhance learning for a long time now. One of my first books on iBooks was an exploration of how we can use AR in the classroom. Things have moved on a fair amount in the four years since I published it.

Now with the right hardware (you’ll need something pretty pokey), you can buy a HTC Vive or an Oculus Rift and really get into virtual reality and do some great things. One of my favourite apps for VR on a Vive or Oculus is still Google’s ‘Tilt Brush” in which you can construct some amazing sculptures and pieces of art all within virtual reality. 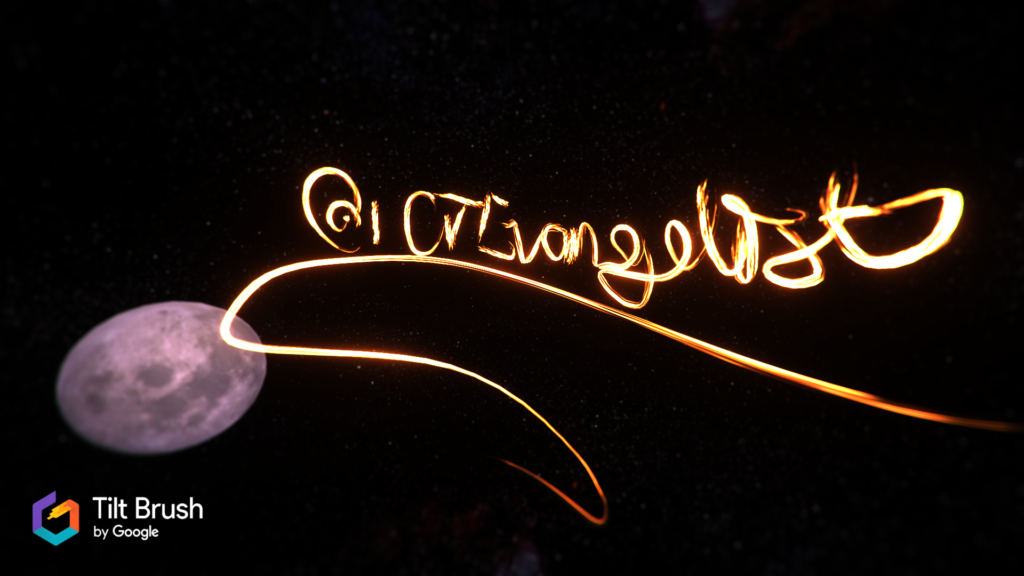 When it comes to AR and VR on an iPad though things are a bit different. For a start, you can’t exactly pop your iPad into a headset, or at least not very easily! That said, you can with an iPhone and there is a tonne of apps available for both iPad and iPhone on iOS that facilitate AR and VR and are well worth a look.

With all of that in mind, I’m very pleased to share with you my latest periodic table of apps which explores the huge array of iOS apps that utilise augmented and virtual reality that can be used in the classroom.

I didn’t do it alone this time either. A good friend of mine that I have known for a long time now and worked and collaborated with on a number of projects over the years is Steve Bambury, head of Digital at JESS in Dubai. Alongside a number of different projects, Steve runs virtualiteach.com – a site focusing on all things AR and VR and is well worth a look.

How did we compile them?

When I was starting to think about compiling a periodic table for iOS AR and VR apps, it made sense to me to collaborate with Steve on this. Together we have compiled 82 apps that reflect some of the best that AR and VR have to offer on iOS, particularly making the most of Apple’s built-in ARKit in iOS 11. There were about 20 more apps that we wanted to include but didn’t quite make the cut. There have been about 15 other versions of this before we finally decided on the ones we have.

We have broken them down into 8 separate categories:

As you will see when you start looking through each of the different apps, some of them fall into multiple categories. We had to pick one though and so where they lie is where we feel they sit best for their use in education – that isn’t to say we are correct but based upon our collective experience, we felt they were the best locations.

Please note that whilst every endeavour has been made to ensure that this collection of apps are suitable for the classroom – across the table we have many apps that carry a 4+ rating but there are others which carry age ratings that are much higher.

It is incumbent upon you to make sure that any apps you choose from the table and use with learners, are appropriate for the age of the learners you are working with.

So where is it?

I tweeted a teaser image on Twitter the other day with all of the apps and app names pixelated. The response has been really good although it would appear that some people thought it was either the ‘actual’ table or a special 8-bit version which, while interesting, we’d never have made the writing illegible!

I am very excited to launch the new periodic table of iOS apps for #ARVRinEDU next week. @steve_bambury and I have just finished wrapping it together and it's looking FAB. Here's a sneak preview. Can you work out which apps made it on?#AppleEDUchat #elearning #edtech #BETT2018 pic.twitter.com/79TAmErzAy

So here it is… 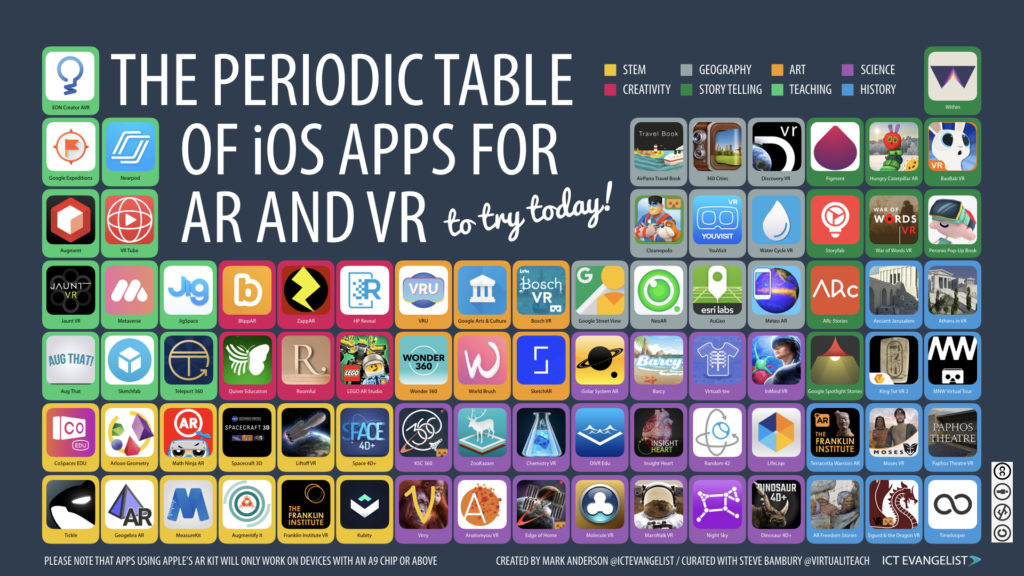 If you are sharing the table, please respect the creative commons license on my work. You can download a high-quality version of the table here.

How was it made?

For the first time ever, the Periodic Table was made exclusively in Keynote for iPad and Mac. As Steve will testify, whilst this work is possible on an iPad, given the fiddly nature of 3 x 82 elements for each app, alignment and getting it all working is very fiddly on an iPad. It is much simpler to arrange, organise, align and colour, using Keynote for Mac. Something else that was easier on the Mac was masking all of the icons to the shapes where the icons sit for each of the elements. Either way though, being able to collaborate through Keynote was key to us being able to work together.

Every time I’ve made a periodic table such as this, people have requested an interactive version so that they can easily find the apps shared. To that end, as with the last periodic table of edu-tweeters to follow, I have put the table into ThingLink and linked each of the 82 apps to their respective places on the App Store to aid finding each of the apps. You don’t even have to type a thing.

The interactive ThingLink for the new table can be found below:

My huge thanks to Steve for all of his efforts on this for working on it with me, it really was a team effort. You can read Steve’s write up about the project on his Virtualiteach site here. Thanks too to Ciarán Kelly for his help too. If you are interested in learning more about how AR and VR can work for you in the classroom with your iPads, please do get in touch. or alternatively, catch me at BETT 2018 this week. Thanks for having a look at the table. I really hope you find it useful!