Developing Computing in a Primary values based school 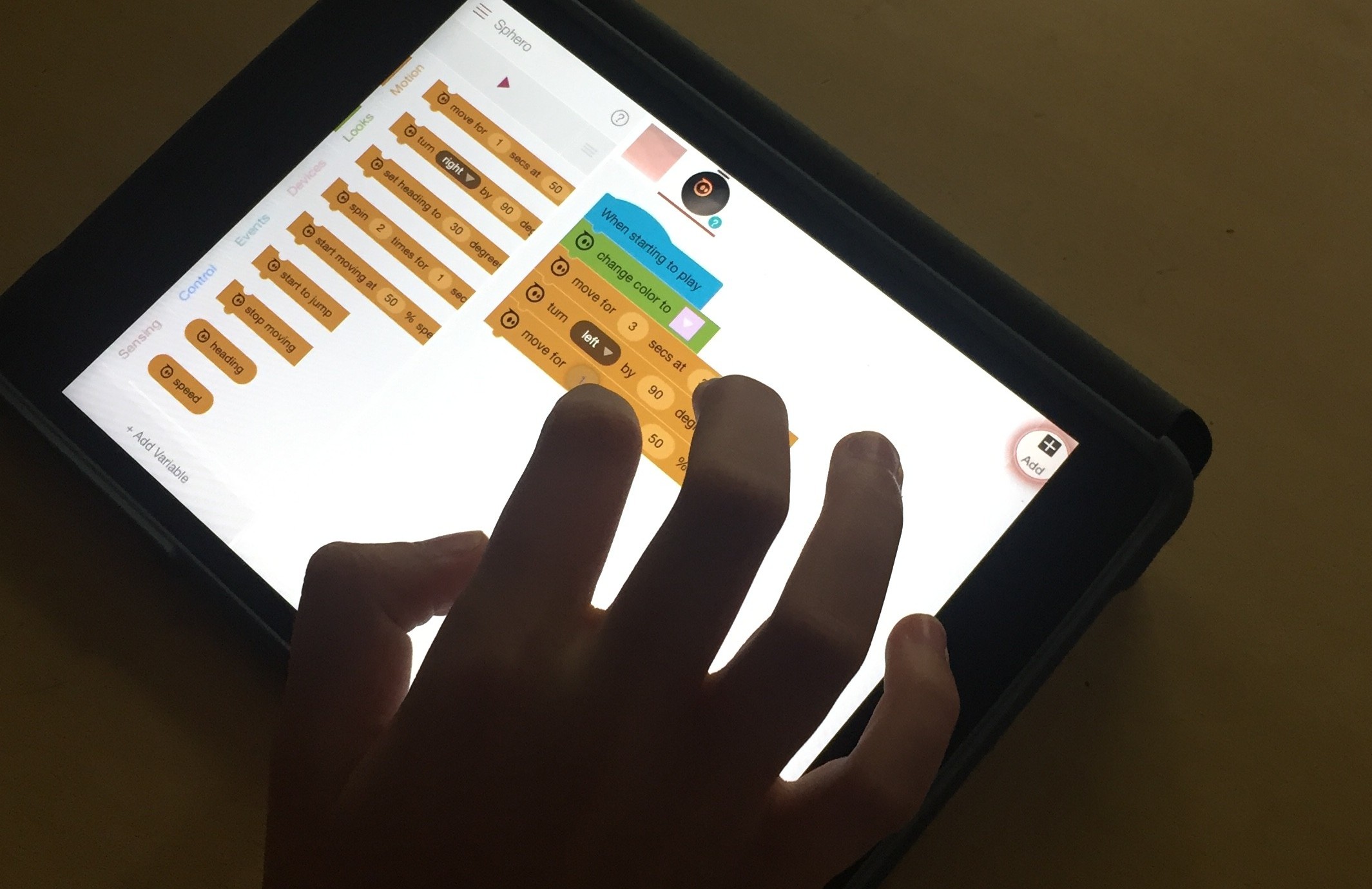 I was delighted to spend two days at the successful values based, Ledbury Primary School this week. 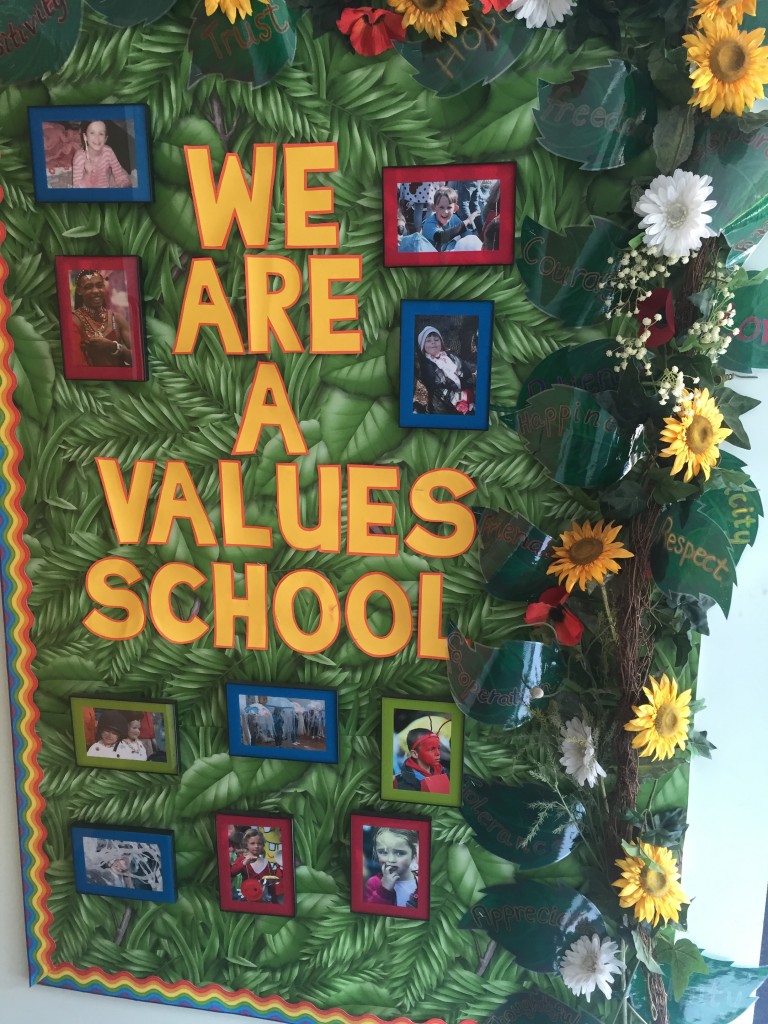 My work there covered a number of areas including a digital parenting session for parents after school and some e-safety sessions, for Y1-5 but more on that in another post.

Another part of my work saw me working with the Computing lead in the school looking at ways in which they could develop their Computing curriculum. Part of this work saw me run two lessons with two different Year 6 classes.

As a fan of Sphero and Tickle I planned a challenge for the Year 6’s to complete.

To introduce the lesson, we explored ideas related to control. Firstly I used my mirrored iPad with the camera on to show how I could control them. Without prompting, as soon as I would show the image of the Year 6s on the screen, so they reacted. When I moved the camera away, they returned to their normal state. We repeated this and then discussed the effect. 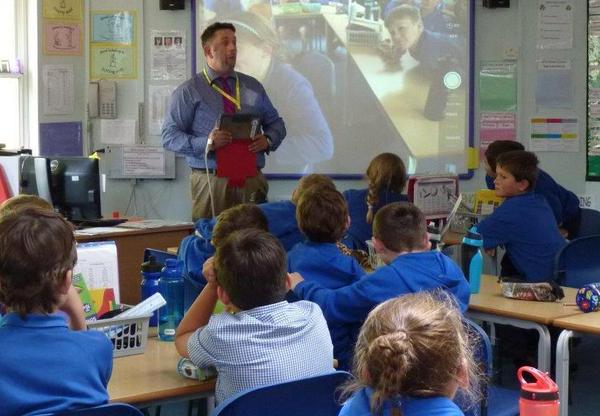 Next up a volunteer was requested to come to the front and we then used verbal commands to control the child. Commands such as jump, forward, left and right turn as well as using degrees rotation were discussed and used with the willing volunteer. We also created some simple loops to repeat regularly used instructions. 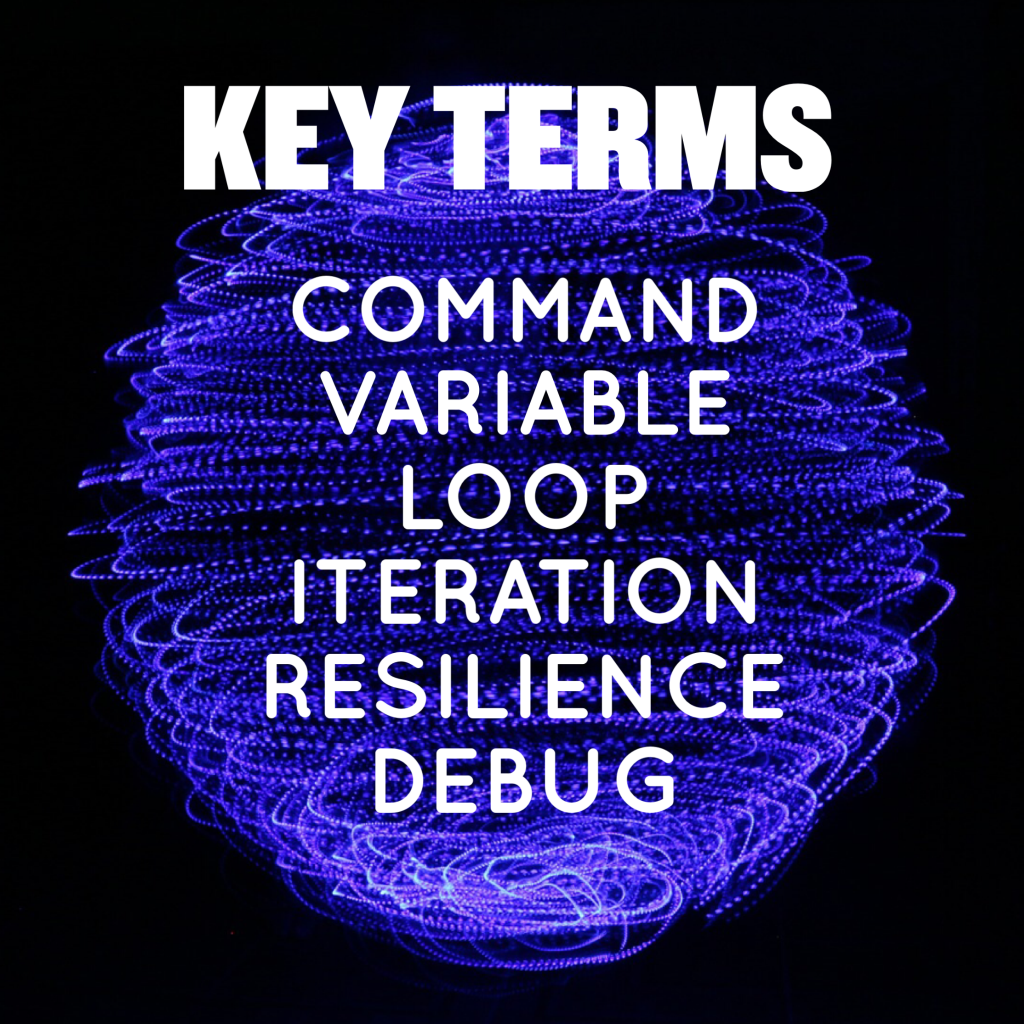 The Year 6’s had some previous experience of using Beebot but there was a lack of confidence in where they were at with their coding knowledge and experience.

My aim in the lesson was to promote values of resilience linked to the importance of debugging in order to create a program. We also looked to explore the ideas of the key words shown above. We spent some time focussing upon the importance of debugging and variables and how tweaking these would have an effect upon the program and its effectiveness. 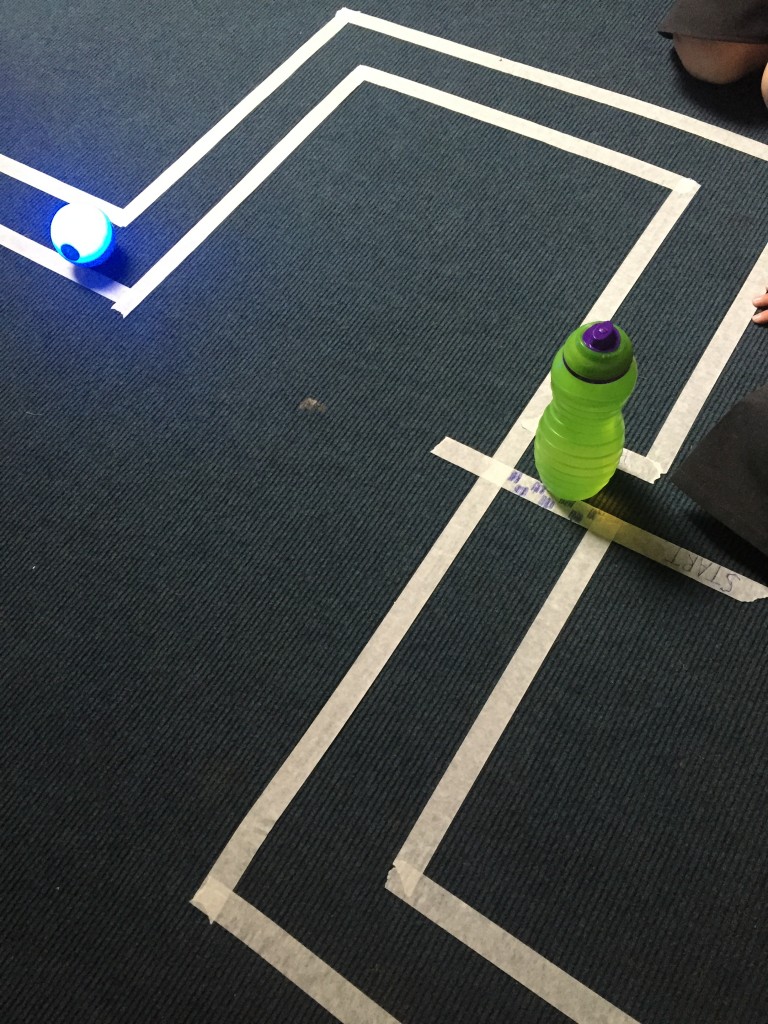 First up we taped some masking tape to the floor to create a course for Sphero. I introduced Sphero and demonstrated the controller app demonstrating how, if we wanted to get a quick and precise journey around the course, we would be better off using instructions. I then demonstrated using Tickle how we would be able to more precisely control the ball creating a short program using Tickle.

Next up students were paired up with an iPad mini and they constructed a program using Tickle to navigate the Sphero around the course. In the lesson I had two Sphero and one Ollie. Some children chose to work with Ollie. 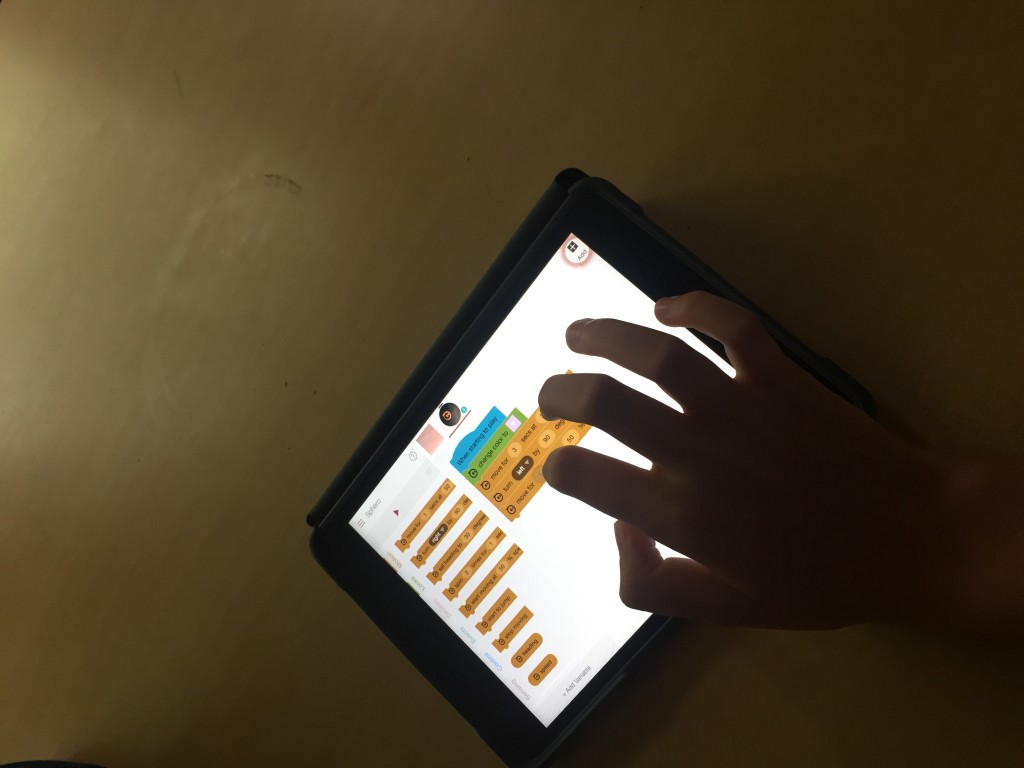 When a pair had completed their program, they then connected to one of the Sphero and checked their program against the movement around the course, noting where the errors were. They then disconnected and refined their programs to correct their errors. 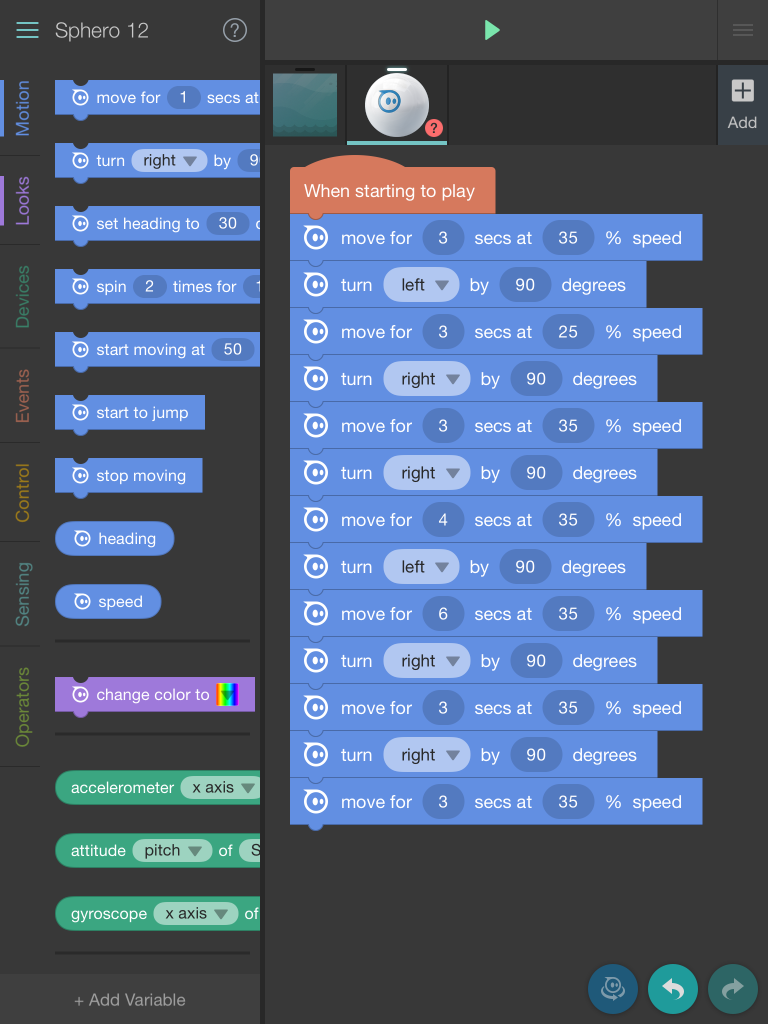 Children, through collaborative evaluation and peer assessment and by tweaking their various variables such as degrees, speed and duration, were able to get close to getting their programs working. With ten minutes of the lesson left however, no child or pair had successfully completed the course. They’d failed…

We spent time in the remaining ten minutes of the lesson discussing the failures. I asked what didn’t work and got some a variety of interesting responses:

We unpicked each of these in turn discussing how they had changed their variables in order to achieve what we wanted. We also talked about forces such as friction between the ball or Ollie and the carpet and how that could impact upon the angles entered and the angle turn experienced by the Sphero.

What was most noticeable to me was that none of the children looked like they had failed. In fact they were keen to try harder and complete it. Perhaps it is the result of Ledbury Primary’s successful values based curriculum. The children definitely demonstrated the characteristics of a growth mindset. They shared ideas. They applied learning from other subjects such as Science and Mathematics. They didn’t give up. They didn’t mind making mistakes. They kept going. Even when one pair managed to miss a corner out but have the rest of it perfect, they didn’t quit – they reiterated and tried to fix the error, not satisfied that it wasn’t correct enough.

As noted above, my aim in the lesson was to promote values of resilience linked to the importance of debugging in order to create a program. Converted to a learning outcome it was: To use Sphero and Tickle App to construct a program so that children are able to understand the importance of failure when it comes to creating a computer program. Given their starting point, I’m pleased with how they got on.

At the end of the lesson I asked a question. “Even though no one managed to successfully navigate the course, how many of you know that you could?” Every child responded positively. I asked again, “…so what do you need to do or have in order to complete the program?” I bet you can guess how they replied. And it wasn’t in the negative! It was really evident that the values of the school are highly embedded in them so that even when a challenge initially defeats them, they’re not defeated overall. The children were able to identify their next steps in relation to the skills they were learning through collaborative evaluation of how they had tackled the task the first time round.

When can I come back!?

My thanks to Julie Rees at Ledbury Primary School and all of her fantastic team for inviting me in to work with the lovely children at the school this week. If you get a chance, get in touch and see some really magical learning taking place in a fantastic school.