Never in my lifetime…

By Mark AndersonJanuary 9, 2020No Comments 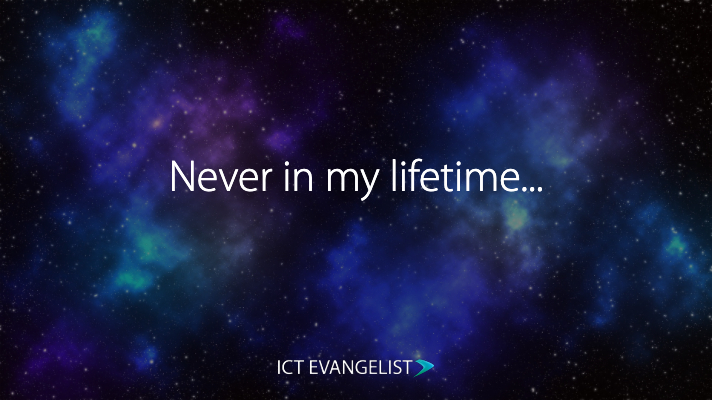 What would you do if you could teach a lesson in a Holodeck?

It’s not long now until the world’s largest educational technology tradeshow, BETT arrives. Slowly but surely the tradeshow has improved its offer for those visiting. Accredited CPD, real-stories being shared, more and more, my vision of BETT becoming more like ISTE is coming to fruition. It’s an exciting time to be involved in education technology. Efficacy, impact and value are paramount and we are truly beginning to see the promise of edtech developing to a point where it can truly support teaching and learning for all.

As we move from one decade into the next I ask the question, what will BETT will look like in 2030? What technological advances will we see in the next ten years that will be showcased at BETT on 23 January 2030? 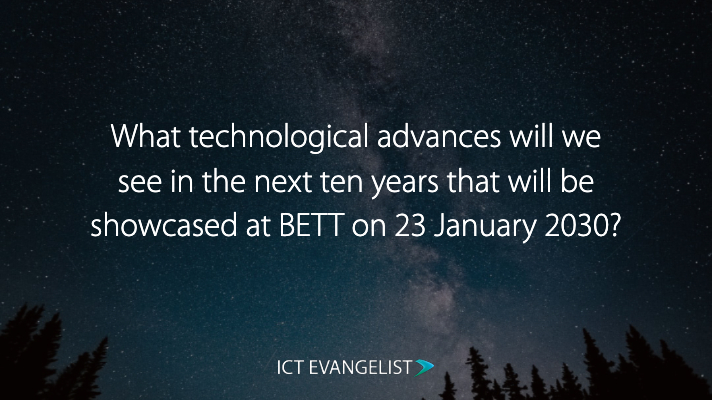 I often share about how as a child I would watch TV programmes such as Star Trek: Next Generation and see them walking around with tablet devices in their hands, running diagnostics and taking measurements of their surroundings. I would always think how cool it was but say to myself “never in my lifetime…”, yet here we are with phones that are more likely more powerful than the computers we typed our dissertations on whilst at Uni, let alone more powerful than the computer systems that got us to the moon.

The advancements in AR and VR in recent years have been huge. Even though it was fake news we even read that protesters in Hong Kong were wearing wearable projectors that project Holograms onto faces to help them avoid recognition. The video shared was actually one placed on YouTube in 2017 by art and product designer Jing-Cai Lu. The projector was created as part of a project, known as “Anonymous,” or “Privacy Mask” organised by the HKU University of the Arts, Utrecht in the Netherlands.

On the flip side, you may have seen @MrErdoganEDU (jokingly) showing a Hologram of himself teaching as schools are shut in Hong Kong, but how long before this is a reality?

I’m often asked about what will technology look like in ten, twenty, thirty years from now and as we approach the end of another decade, ripping through the 21st century at breakneck speed we have the opportunity to reflect on the last decade but also to crystal ball gaze into where we might be in ten years time.

As the human race advances, so does our technology and so I started thinking about the next evolutionary step up from AR and VR and Holodecks seem to be the obvious answer. 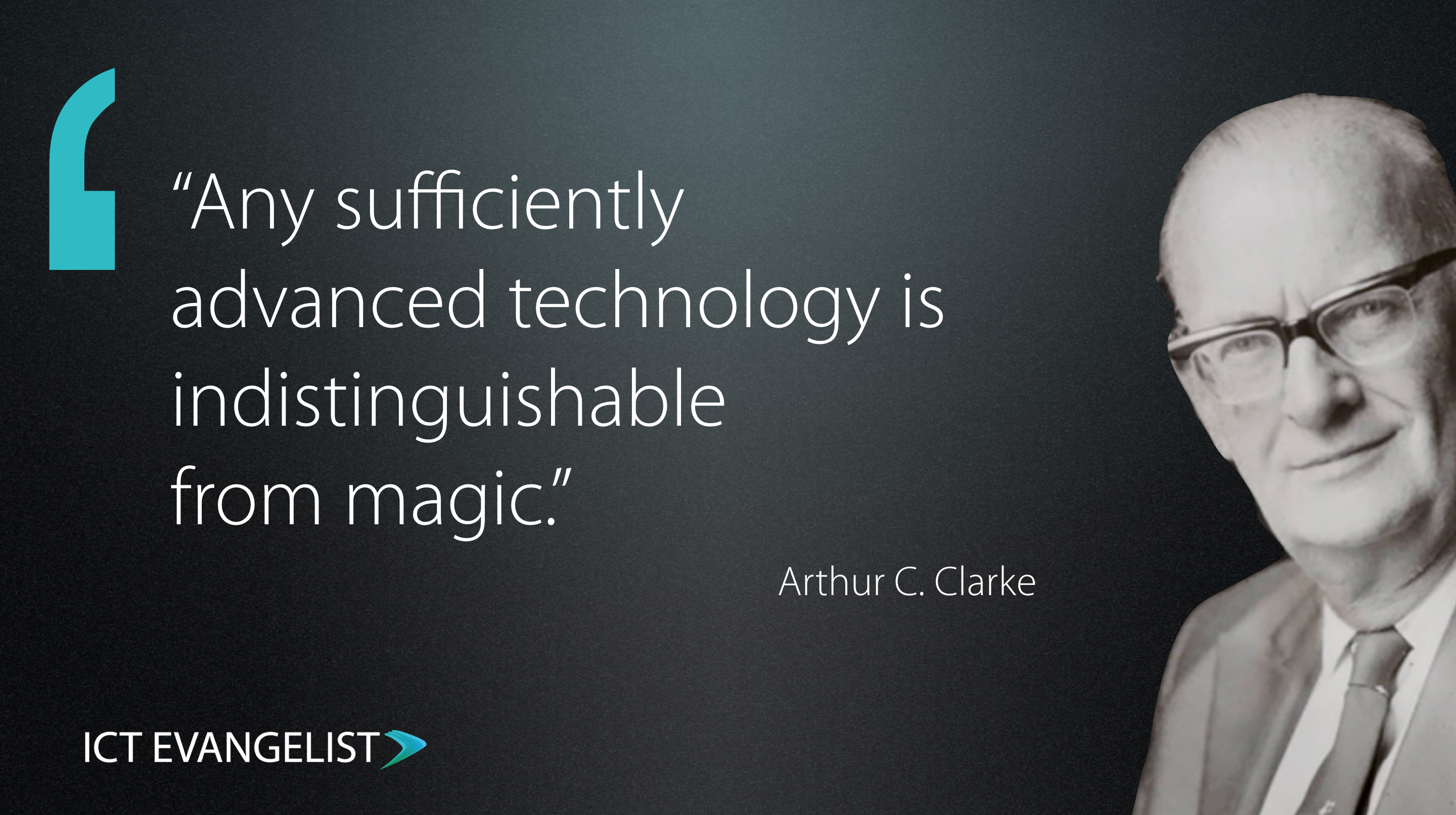 Just like most people never use their landlines any more, will we still be making phone calls from home using our smartphones? Ok, so maybe with our parents, but what will we and our children be using? Will we just meet face to face using VR? Probably, but I think technology will advance even further than this.

We see Steve Bambury and others engaging, networking and connecting in CPD sessions using VR on a regular basis. Soon, with the cost of these technologies reducing all the time and getting ever more efficient and powerful, we are going to increasingly see meetings, conversations and more taking place in this manner.

Developments are happening already pushing the boundaries of hand-tracking in activities in VR. Pokemon Go and other developers are working on Shared AR experiences using mobile devices. Occlusion (the ability for AR items to disappear behind real-world items) is being worked on by many developers. How long will it be with the variety of developments and advancements in quantum computing, machine learning and AI push further so that Holoimages will be appearing before us in our own mixed realities?

So with that in mind…

We can view webinars already and engage through chat panels with people and hear and see responses from hosts, but why is it that for the most part, we would still prefer to attend the event? I would suggest it’s because we want to not only hear and see the presenters, but we want to engage with the other attendees too. Learning often happens between the cracks and so being able to have a conversation with others between sessions can often provide as much insight as that which you get from the presenter. It helps us to forge relationships and friendships. The human connection that we get from being able to look at each other and read our body language helps develop those relationships more readily. For all of our love of technology and its potential, we still cannot escape the importance of human interaction. For years the study of HCI has brought about improvements to the ways in which our technologies interact with us but nothing (as yet) still beats those reactions and visual cues we get from interacting with a real human. Holograms and Holodecks could help us move past this. Not only through the high-quality digital mannequins that we could interact with but also those other people who can attend these spaces remotely to engage with us. With these advances and as processing power increases exponentially, so the quality of the graphics facing us improve too.

We don’t know how long before these sorts of advances will be commonplace and mainstream but it stands to reason that these things will come to pass.

I’m looking forward to sharing at the Jumeirah English Speaking School’s annual Digital Innovation Summit in February. The focus of the event is looking closely at Well-being and Safeguarding in a Digital World. A school which has been at the forefront of innovation with technology in education in recent years, particularly with the use of VR in the classroom, it’s going to be a fantastic event.

The reason why I mention the event is that one of my sessions will be exploring what the internet will look like in 2030 and how we can prepare our learners for this uncertain future. As we recently experienced in what I consider to be the most frankly bizarre election campaign here in the UK with deep fakes, technology influencing the election and organisations such as the BBC routinely faking news and editing videos, we know that technology pervades our lives every day. How do we prepare our young people for this kind of world?

Moreover, how long before teachers have Holodecks to take their learners to for learning experiences? I don’t know when it will be. The moment know. Could it be in 2030? Or 2040 or even 2050? I don’t know, but I’m certain that one day it will… I’m certainly not going to be saying, “never in my lifetime…”!